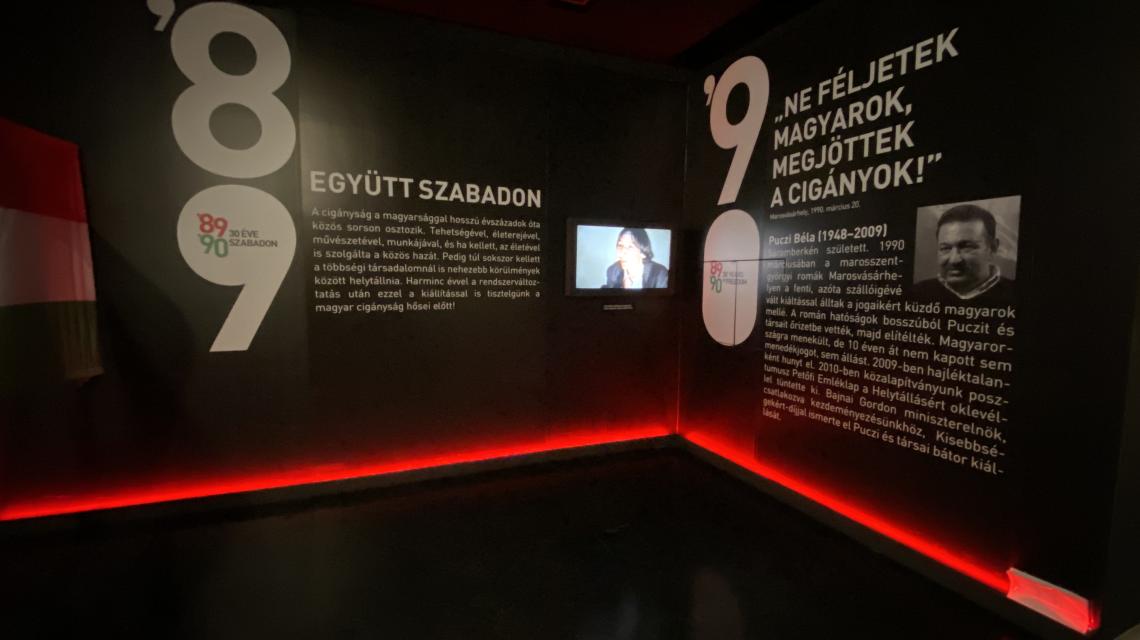 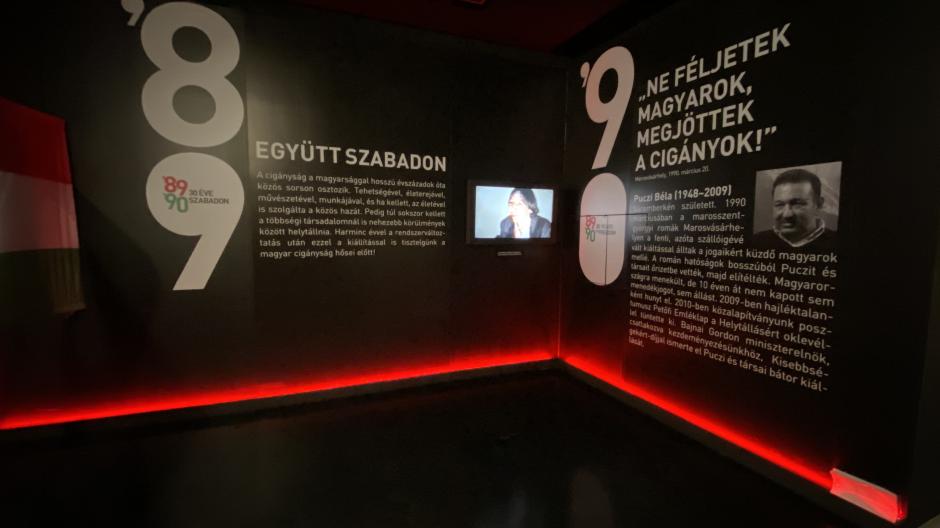 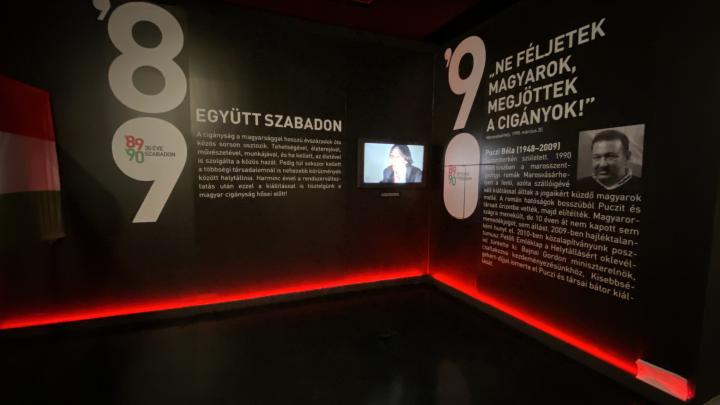 Gypsies have shared a common faith with Hungarians for many centuries. They put their talents, vitality, arts, physical work, as well as their lives when needed, at the service of their common homeland. Although their hardships were often greater than those of the majority population, 30 years after the regime change this exhibition is intended to be a gesture of homage to hungary’s gypsy heroes. You can enter the exhibition for free.

He was born at Sáromberke / Dumbrăvioara. He was 42 when, in Marosvásárhely / Târgu Mureș, Gypsies from Marosszentgyörgy/Sângeorgiu de Mureș took sides with the Hungarians fighting for their rights in March 1990. In retaliation, Puczi and several of his comrades were arrested by the Romanian authorities, then condemned to various prison terms. He fled to Hungary but did not manage either to be granted asylum or get a job. He died as a homeless in 2009. He was posthumously awarded the Petőfi Diploma of Resilience by our public foundation in 2010. Joining our initiative, Prime Minister Gordon Bajnai awarded him the For Minorities Prize in recognition of the courage shown by Puczi and his comrades.

He wrote his first poem at the age of 23, while his first newspaper report described life in the workers’ hostel where he lived, until he was dismissed in the wake of that very report. He published over 20 volumes of poetry and newspaper reports. He was one of the central figures of the world of Roma intellectuals in the 1970s and 80s. He was an assiduous participant of camps for young Gypsies where he held unorthodox lectures on literature. His works have been published in Dutch, German, English, Croatian and Romani. Throughout his life, he remained attached to his native town, Mohács where he was a member of the city council from 1994 to 1998.

Recollections put her age at only 17 and describe her as four months pregnant, when along with her friends, she joined the revolution. Shoulder to shoulder with his fiancé, Gábor Dilinkó, she was part of the armed group of freedom fighters based in front of Corvin Cinema. She was shot dead at the Western and of Práter Street. Her body was thrown into a garbage container.

After having grown up at the Gypsy quarter of Kiskunhalas, he became a locksmith. During the last years of the communist dictatorship, he worked as a social worker in one of the first family support Institutes in Hungary. He graduated as a social worker from ELTE University and became, after the regime change, chairman of the local minority self-government, of the local city council and vice-chairman of the National Roma Minority Self-government. It is his merit that by now, one of the deputy mayors of Kiskunhalas is a representative of the local Roma community.

He started playing the piano at the age of nine. Studied classical music, but found jobs as a bar musician in Moulin Rouge, the Royal and the Astoria hotels. He was barely 21 when he played in nightclubs in Sweden, Switzerland and Germany. Upon his return, 10 years later, he started a new career as a jazz musician. He played an important role in spreading fusion music in Hungary. He taught jazz piano at the High School of Musical Art in Budapest for 12 years. His Gypsy musical entitled Rat Caravan was staged in 1975. His album entitled Na dara! (Don’t fear!) Which created a new musical genre, Gypsy Jazz, was issued in 2004. He won the Kossuth Prize in 2005.

He would make drawings all any possible surfaces – the doors of cupboards, bedsheets, windows. His application to study at the Budapest School of Fine Arts was rejected, unlike his application to the Dutch Royal Academy of Fine Arts. He returned to Hungary in 1974 and became a figurative arts teacher without a teacher’s degree. His studio soon became an important meeting point for Roma intellectuals, and he played a decisive role in setting up the first official gypsy organisation, the Cultural Alliance of Hungary’s Gypsies. In 1992, he became an MP on behalf of the Socialist Party. He was re-elected in 1994, but died before the end of that year, at the age of 47.

He was born in Barcs where most of the Roma community still lives in a separate quarter of the township. Until 1990, Tibor worked in the local sawmill as a welder and as a maintenance worker. From the mid-1980s, he was one of the people who set up a Roma football team named after the famous violinist Pista Dankó and which survived until 2017. At the first free local administrative elections, he was elected a councilmember and then he founded the Organisation of Gypsy Council Members of Southern Somogy County. In 1991, he was a founding member of the Roma Parliament and headed the local minority self-government in his hometown until his tragic early death.

She lost both her parents as a young child. When the family moved to Budapest,

Magdi enrolled in an elementary school in Csepel, Budapest 23rd district. After long detours, she became an educator herself, thanks to her erstwhile teacher. She graduated and started teaching in 1981. At the time, her teaching methods were considered to be unorthodox – she would sit down with her pupils on a carpet, and, whenever they would get tired, they could have a rest on a pillow or on the lap of their teacher. With her husband, a teacher-engineer, she set up the country’s first gypsy minority kindergarten in Csepel, in 1993.

Born on the vineyard slopes at Görgeteg as the sixth child of a family of Beás Gypsies (who speak a Romanian dialect), he went to a vocational school to become a turner, then into a teacher training college. He started out as a teacher along with his future wife at the Sümeg grammar school. Along with Tibor Derdák, Anna Orsós and István Vörös, they set up the first Roma high school, the Gandhi Grammar School, of which he became and remained headmaster until his death in a car crash in 1999.

After graduating from the Nagykőrös People’s College in 1954, he found a job as an operating engineer at Szarvas and then in his native town. He had his first writing published in 1970. He worked as a freelance writer from 1973 on. He devoted innumerable books to the life of his fellow Gypsies. His first novel, Smoky Profiles, sold hundred thousand copies in Hungary alone. He became chairman of the Cultural Alliance of Hungary’s Gypsies in 1988 and ran for a seat in Parliament on behalf of the Independent Smallholders Party in 1994.

He descended from a family of musicians for several generations. He started his career, in 1967, with the world-famous Rajkó Orchestra. He became known as a composer in the mid-1970s. In 1984 he was commissioned by Magyar Televízió to co-author with Menyhért Lakatos, a musical ballad entitled Curse and Love, which was then staged in several countries and won prizes in several festivals. He also co-authored, in 1989/90, the script of a six-hour documentary film entitled Europe’s Gypsies to which he also cooperated as musical editor and expert adviser. In 1995/96, he was one of the main organisers of the first Gypsy Cultural World Festival. He was the leading figure of and a contributor to the Roma magazine of Magyar Televízió and Radio C.